Robots have been used in manufacturing environments for a long time (Scheer, 2018). Whole manufacturing lines have been automated using robots to execute manufacturing steps, handle parts or transport them to then next production unit. RPA transfers this automation approach into the administrative and management work of an organisation. RPA tools, so called “Bots”, are software programs that operate on the user interface of other computer systems in the way a human would do (Wikipedia, 2018). These tools differ from traditional software by working at the user interface level, replicating the exact actions a human user would take, they basically recognise and read fields on a screen of an application software, modify the content if necessary and enter it into other fields of the same or different software. All of that happens based on predefined rules (Harmon, 2017). This means the Bots execute business process steps using the appropriate application software. In addition, they influence the business process directly by driving a specific process flow, for example, a business process that enables the automated handling of standard situations and the work on exceptions through humans, increasing work efficiency by automating the human workforce with a digital workforce, allowing the humans to provide more valuable engagement in improving customer service and ensuring compliance with controls and regulations. The definition of RPA is summarised in Figure 1 on the next page. 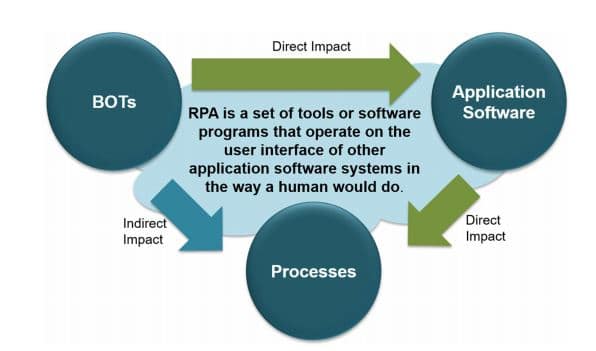 The integration of artificial intelligence (AI) and cognitive automation components into the RPA tools makes them even more powerful since RPA starts handling unplanned situations and deals with unstructured data. Also, the handling of verbal information is possible using “Chatbots” in an RPA environment (Scheer, 2018). The combination of the RPA with AI is often referred to as Intelligent Process Automation (IPA) or Smart Process Automation (SPA), as part of intelligent automation in general.

Just like industry robots automate manufacturing and assembly steps, RPA robots automate the human work with data and information. This is the extension of the first automation phase of business activities through traditional software, such as Enterprise Resource Planning (ERP) systems and the following automation of the workflow through integrated Business Process Management Systems (BPMS). It is estimated that over 50% of current human interaction with those systems can be automated through RPA resulting in significant performance increases (Scheer, 2018) (Mori, K, Burnett, 2017). All this can be achieved with relatively moderate investments which makes RPA even more attractive for organisations. It has become a core component of many digital business transformation initiatives.